Sometimes the most difficult conundrums can have simplistic solutions. Fishermen in the Pacific Northwest are proving they can be harvesters and conservationists, over the years shrimp nets accidentally captured large amounts of threatened little fish, called Eulachon.

Exit lights on nets: Bright LEDs are zip tied to nets and are guiding the little fish out of harms way. The Shrimp however are not strong enough swimmers to make out of the exit It’s a simple and cheap fix that’s significantly reduced Eulachon bycatch, says Oceana scientist Geoff Shester. This only supports the idea that fishermen can live harmoniously with the environment on which they depend and create solutions that are good for fish and fishermen.

“Basically, lights lit up where the exit is,” Shester says. “The fish go to it and the shrimp don’t.”

Since the 1950’s this little silvery fish perished in nets but now there has been a 90 percent reduction in bycatch after installation LEDs. Credit: Scott Groth.

Net lights work remarkably well, but the LEDs are not legally required. Most Oregon shrimp fishermen use them anyway. “Fishermen in this fleet are really progressive,” Groth says Fishermen like the lights because they’re inexpensive and yield a cleaner catch, which saves time sorting shrimp from everything else. Groth estimates that somewhere between 80 and 90 percent of Oregon shrimpers use the lights today. 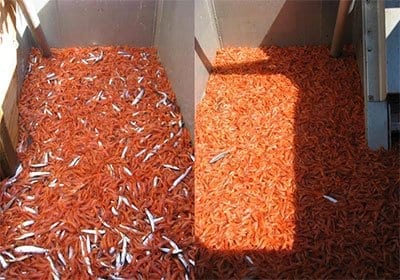 Before and after bycatch using LEDS