5 ways industry is keeping seafood sustainable in Australia for #SustainableSeafoodWeek

In honour of celebrating #SustainableSeafoodWeek we have listed five ways Australian fishermen are keeping our seafood at world class sustainability levels.

In response to injury and death of Turtles in trawl nets The Australian Seafood Industry has implemented Turtle excluder devices (TEDS) for the last 20 years.

They are designed to help turtles swim out of fishing nets if they are accidently caught. They contain a rigid barrier grid, which is attached to the circumference of the net and guides turtles towards an escape hole either above or below the grid. Without these devices, turtles can become caught in the codend of the net and cannot reach the surface to breathe. TEDs also allow larger animals such as sharks and rays to escape the net.

Sea Birds were previously victims of themselves by chasing fish offal dis-charged from fish pen shoots on the side of trawl boats. Whilst chasing the discarded product they could become entangled, injured or killed by warp cables.

To prevent this The fishing industry invented The Bird Baffler, a structure that acts as a curtain around the perimeter of the boat with swinging tubing preventing birds flying towards the cables.

This innovation “is proven to reduce interactions by 96%” the industry is very excited about how well it had worked as the birds completely stay away now.

4. Fish chutes keep birds away and save fish at the same time

NSW professional fishers use a seabird predation mitigation device known as a fish discard chute, to ensure non-retained fish species are returned to the water at the point of capture, as quickly as possible and with the least possible harm.

This technique was designed by professional Estuary General fishermen to mitigate seabird predation on live non-retained species and is a regulated and approved device. Use of an approved discard chute is a requirement of licensed and endorsed Estuary General mesh net fishermen and is also highlighted in the Estuary General Fishery Code of Practice.

Check out how it works below

A deep setting longline fishing technique trialed in Australia helps in reducing bycatch in Australia’s tuna fisheries. Whilst setting the lines, Albatross and other diving seabirds such as Petrels can become hooked or entangled and drown as the longline sinks.

This technique ensures hooks are quickly sunk to avoid interactions are at a depth birds cannot dive to. 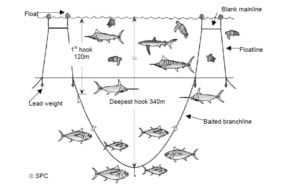