Happy St Patrick’s Day! In celebration we are featuring all things green the ocean has to offer.

The Sea sheep (Costasiella kuroshimae) is a sea slug that which can grow up to 5mm in length. What’s fascinating about the tiny ‘leaf sheep, is that they are one of the only animals in the world that can perform photosynthesis. When they eat algae, they suck out the chloroplasts and incorporate them into their own bodies in a process called kleptoplasty. This process, which otherwise can only be performed by single-celled organisms, essentially makes them solar-powered slugs! 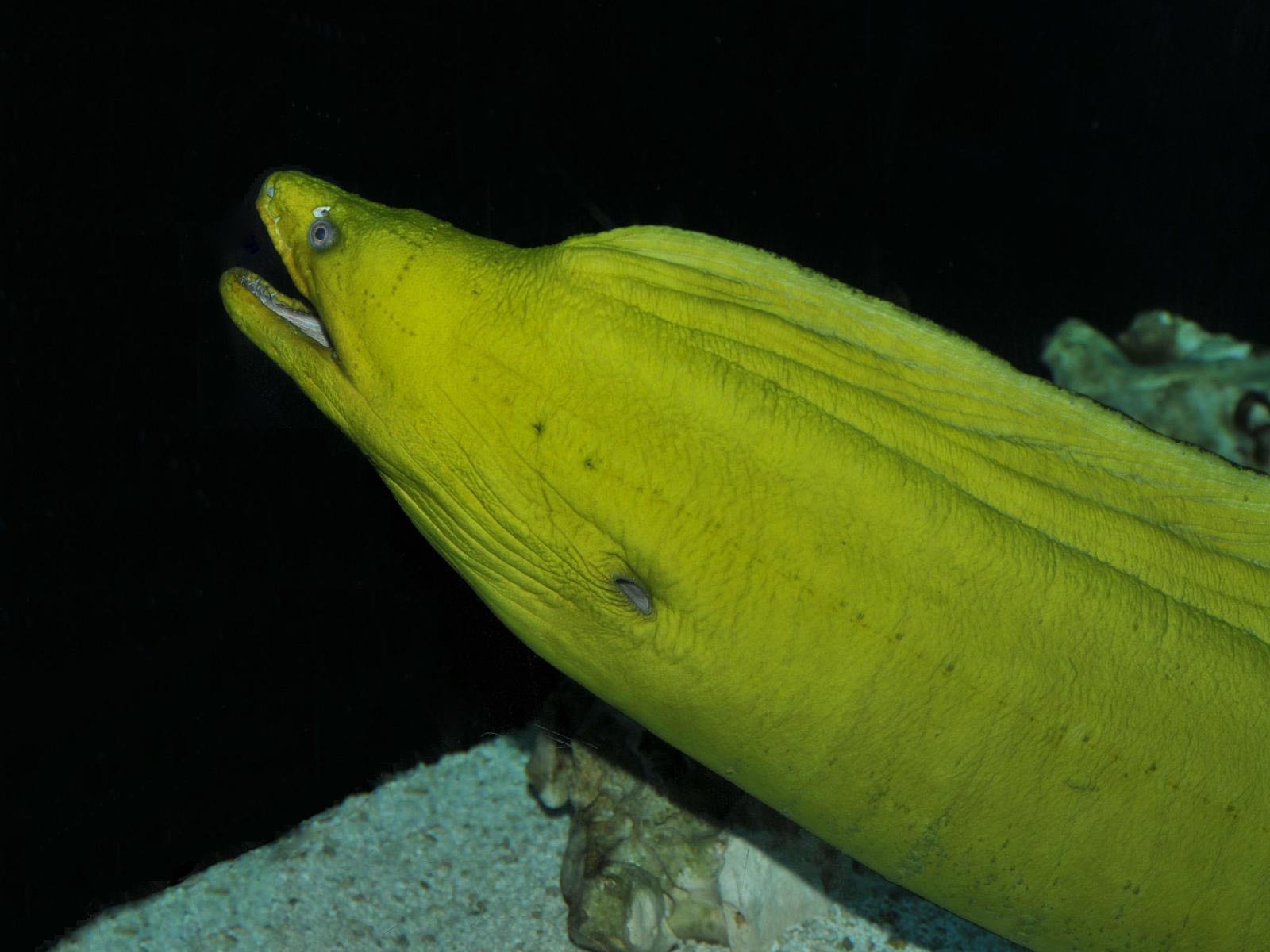 Green moray eels average 6 feet in length and 30 pounds, although individual eels have been known to grow as large as 8 feet and 65 pounds. Typically found on coral reefs, rocky shorelines and in mangroves in water less than 100 feet deep, the eels enjoy a wide range of habitat.

A nocturnal hunter, the green moray has poor eyesight, hunting – fish, squid, crabs, shrimp and occasionally other eels – primarily by smell. During the day, it hides in rocky crevices, with only its head emerging from the opening. Whether or not it is feeding, its mouth is constantly opening and closing, forcing water through its gills for oxygen. 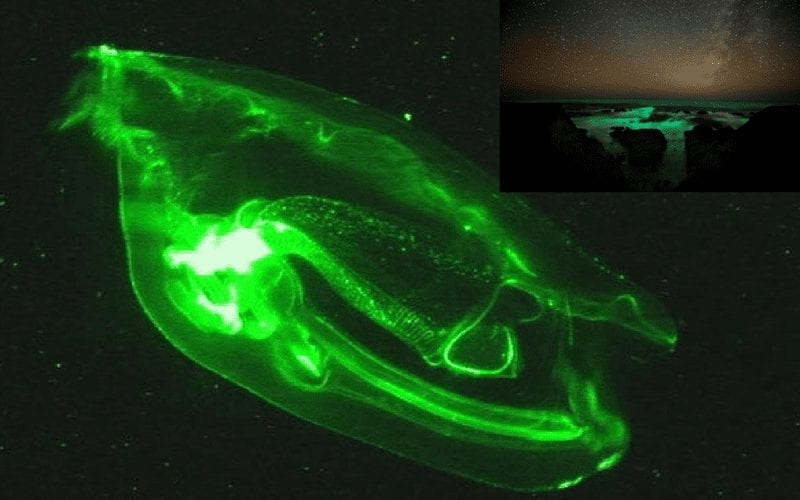 The salp is a 5-inch (13-centimeter)-long , barrel-shaped organism that resembles a streamlined jellyfish. It lives in mid-ocean waters where it filters the seawater for food particles. Salps are bioluminescent and exude flashes of light and can also be responsible for the eerie beauty of the green tide. Salps swim and eat in rhythmic pulses, each of which draws seawater in through an opening at the front end of the organism. 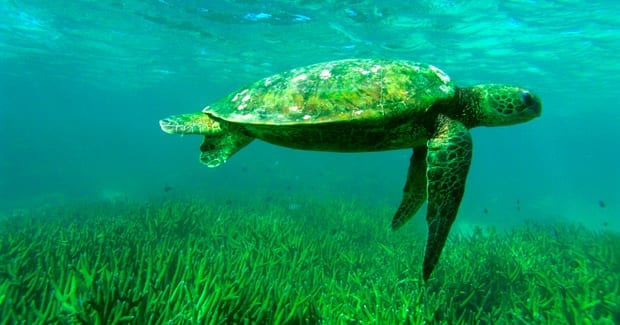 The green sea turtle (Chelonia mydas), also known as the green turtle, black (sea) turtle, or Pacific green turtle, is a large sea turtle of the family Cheloniidae. It is the only species in the genus Chelonia. Its range extends throughout tropical and subtropical seas around the world, with two distinct populations in the Atlantic and Pacific Oceans, but it is also found in the Indian Ocean. The common name comes from the usually green fat found beneath its carapace; these turtles’ shells are olive to black.

This sea turtle’s dorsoventrally flattened body is covered by a large, teardrop-shaped carapace; it has a pair of large, paddle-like flippers.The adults usually inhabit shallow lagoons, feeding mostly on various species of seagrasses.The turtles bite off the tips of the blades of seagrass, which keeps the grass healthy 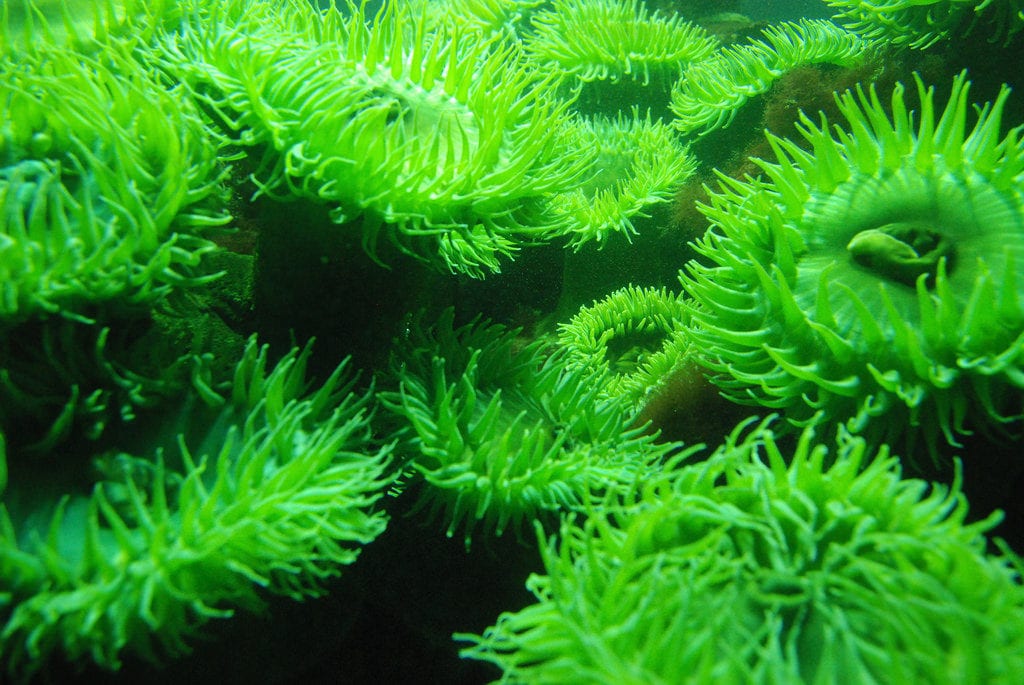 This species is typically a solitary, large anemone. Its coloration comes from green pigments in its skin as well as symbiotic algae that live in the lining of its gut. When exposed to sunlight this anemone “farms” some of its nutrition from the material created by this algae.

Anemones are closely related to jellyfish and corals. They paralyze and capture their prey after it comes in contact with the anemone’s stinging tentacles. Once immobilized, the anemone pulls the prey into its mouth, which is located in the middle of the tentacles. When digestion is complete, they excrete waste through the same opening.